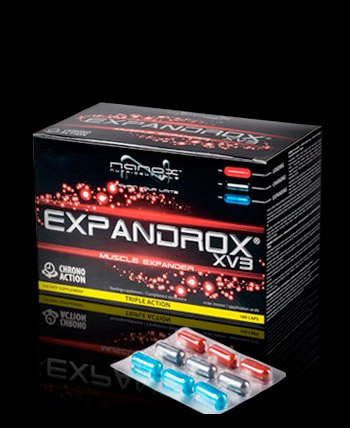 Expandrox XV3 is a top nutritional supplement containing such a combination of ingredients searching for a maximum of synergy between its components. Expandrox XV3 also presents these ingredients in an order following chronobiological processes in your body and so offering the right ingredient at the right time of the day.

PRESENTATION: Expandrox XV3 is presented in a box with 21 blisters. Each blister containing 3 red capsules, 3 silver-grey capsules and 3 blue capsules

Is it possible to make a nutritional supplement which maximize our performance on short and medium term?

It’s not easy to realize but with an exact combination of modern ingredients we can meet these expectations a lot.

Expandrox XV3 is a top nutritional supplement containing such a combination of ingredients searching for a maximum of synergy between its components. Expandrox XV3 also presents these ingredients in an order following chronobiological processes in your body and so offering the right ingredient at the right time of the day.

Ultimate goals of the product are supporting a maximal increase in performance by:

– optimal stimulation of muscle growth
– maximizing endurance and aerobic muscle performance
– maximizing sprint capacity or explosive power by maximizing the anaerobic muscle capacity
All kind of athletes will benefit from Expandrox XV3, whether they will be sprinters, power sporters or endurance sporters.

Find out here below what makes Expandrox XV3 to such a complete and special support for you!

Fenusteroles is a very specific fenugreek extract, containing 8 main plant sapogenins (furastanol saponins) of which the most important diosgenin,sarsapogenin, smilagenin and yuccagenin. In sports nutrition, the anabolic effects of the furostanol saponins is used to induce increase muscle mass and strength, with the consequent improvement in athletic performance.
Furostanols preparations increase testosterone levels and so from a sports nutrition point of view are particularly promising since increased testosterone levels increase the deposition of protein in the muscles, leading to increased muscle mass and strength.

– An increase in endurance with 15 – 20%
– An increase in VO2max by an increased oxygen uptake due to pulmonary vasodilatation.
– A progress in oxygen transport
– Doubling the buffer capacity of the muscles and so an increased resistance against acidification
– A faster recuperation

The first one is focused on increasing oxygen transport, capacity and energy production. The second one fighting muscle acidification and tiredness.
The amount of oxygen we can assimilate, transport and consume within a given time plays an important role in our performance and physical condition. The higher this amount the higher the level of our physical condition.
NO-synthesis and vasodilatation at muscular and pulmonary level play an important role in this.

Currently, it is known that NO synthesis occurs via at least two physiological pathways: NO synthase (NOS) dependent and NOS independent. In the former, L-arginine is the main precursor. It is widely recognized that this amino acid is oxidized to NO by the action of the NOS enzymes. Additionally, L-citrulline has been indicated to be a secondary NO donor in the NOS-dependent pathway, since it can be converted to L-arginine. Nitrate and nitrite are the main substrates to produce NO via the NOS-independent pathway. These anions can be reduced in vivo to NO and other bioactive nitrogen oxides. An increase in NO production may enhance oxygen and nutrient delivery to active muscles. NO also dilates the pulmonary arteries and increases the level of perfusion in the lungs, thereby allowing for greater arterial oxygenation.

Expandrox XV3 combines the most efficient way in stimulating arterial NO release by either of the two mechanisms used by our body for producing NO.

Red beet extract is a highly charged source of bio-available nitrates/ nitrites producing No via de the NOS – independent pathway while the high citrulline and arginine content of Expandrox XV3 stimulate the body’s NO synthase pathway. The combination of both pathways is leading to a very efficient vasodilatation as well in the muscles arteries (oxygen consumption, output, power and resistance) as well in the pulmonary arteries (oxygen intake)!

These two sources of Nitric Oxide present in Expandrox XV3 are completed by a novel substance called “VINITROX”.
Vinitrox is a combination of apple extract and whole grape extracts.
While the grape seed extract is a premium source of potent polyphenol antioxydants, the apple extract is a first class source of chlorogenic acid.
Thanks to this composition Vinitrox is a strong nitric oxide enhancer which will make that the release of NO out of citrulline and arginine sources is more massive than without this antioxidant stimulans: 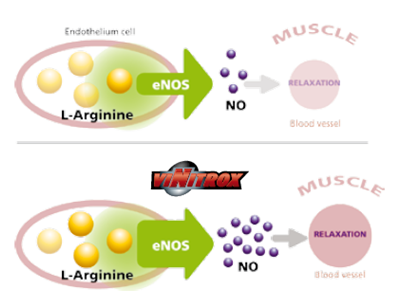 The second strategy that Expandrox XV3 is using to increase performance and endurance is present in its high Beta alanine content.
Beta alanine couples in the body with histidine and is forming together Carnitine. High amounts of Carnitine in the muscles are increasing the buffer capacity of the muscles dramatically and in this way fighting against acidification and increasing endurance. We simply can work harder and longer without having muscle cramps.

Beta alanine however is also necessary for the NO-forming process. So, the presence of the complex “citrulline malate – red beet extract – AAKG – Vinitrox – Beta alanine” is the strongest NO – stimulating product on the market of sport foods.

Besides its rich content on nitrates, Red beet extract is a premium source of Betaine, which si combining in the body with the nitrate present in the extract to Betaine-nitrate. Betaine-nitrate is modulating anaerobic signalling and can increase sprint capacity with up to 6% in a week time!

Beta-alanine is already explained as forming carnitine and so increasing the buffer capacity of the muscles fighting against acidification. This is particularly important to increase your sprint capacilty as well in velocity as in length, and in general increases your (explosive) power or the time you can stand a maximal effort.
PRESENTATION: Expandrox XV3 is presented in a box with 21 blisters. Each blister containing 3 red capsules, 3 silver-grey capsules and 3 blue capsules

This product contains capsules with gelatin of bovine origin. Capsule are delivered by Pfizer/ Capsugel. If necessary a BSE/TSE free certificate is available

Expandrox XV3 acts in a chronological way. By this it is very important to respect the order of consumption of the capsules. Moring, during breakfast: 3 red capsules; at noon during lunch: 3 silver-grey capsules; one hour before training or before supper in the evening: 3 blue capsules. 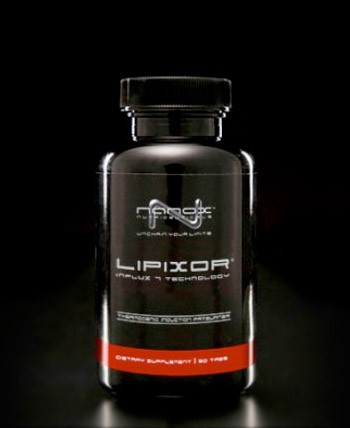 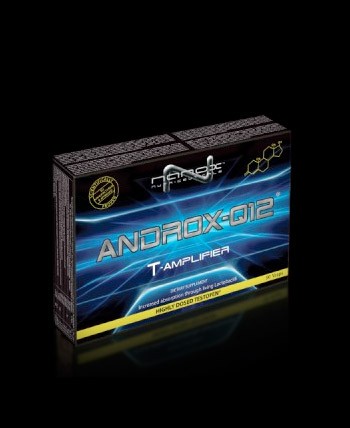 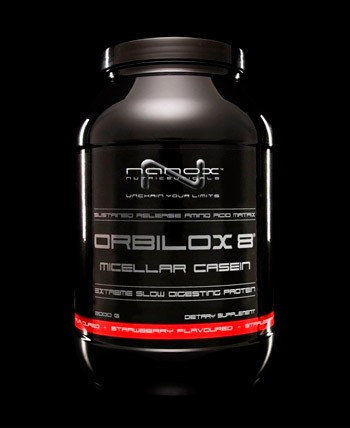